This guide shows you how to use change detection to optimize monorepo continuous integration (CI).

A monorepo is a container repository with multiple separate applications or projects. Semaphore maintains a monorepo reference demo on GitHub that you can use to learn:

You’ll find a Semaphore configuration file with a sample CI pipeline at .semaphore/semaphore.yml.

The repository contains three individually-deployable applications. They can be found under the /services folder.

These applications are meant to work together. After forking and cloning the repository, you can start the suite with the following command:

Overview of the pipeline#

The pipeline performs the following tasks for the three applications in the monorepo:

To avoid re-running tasks for unchanged code, the pipeline uses change detection. This means that when an application has been modified by recent commits, the related block runs; but unchanged blocks are skipped.

The following screenshot shows the workflow resulting from changing a file inside the /service/ui folder: 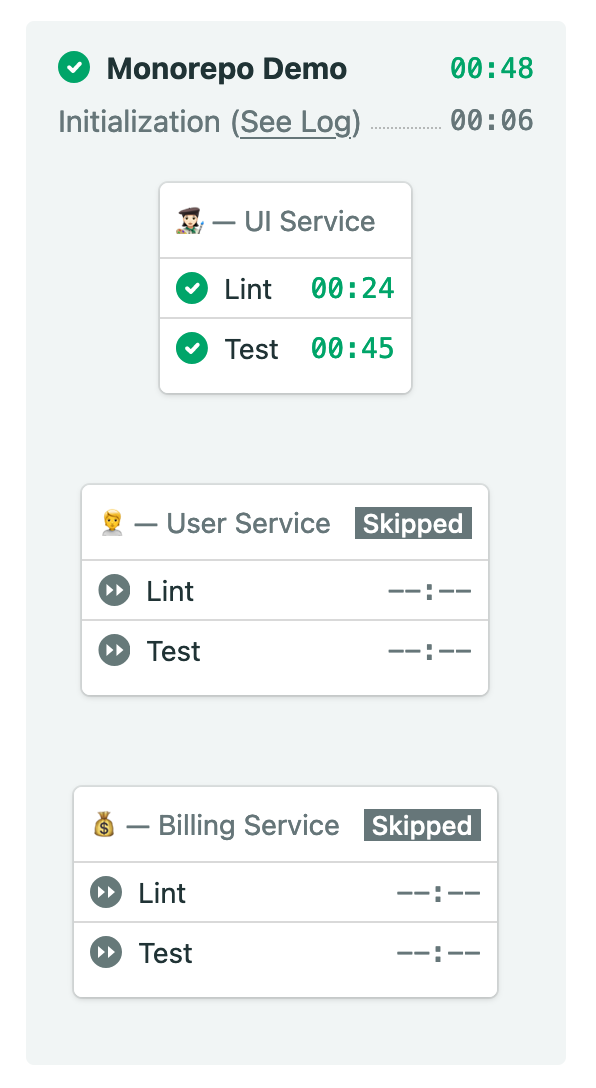 The demo uses the following configuration. If you're new to Semaphore, we recommend going through the guided tour and related documentation for more information.

Run the demo yourself#

A good way to start using Semaphore is to take a demo project and run it yourself. Here’s how to build the demo project with your own account:

You can use change_in to build smarter pipelines. The change function not only allows you to skip or activate blocks, it can also be used within promotions to start additional pipelines.

To learn more about change_in, you can also check out these resources: - Monorepo workflows - Change_in reference